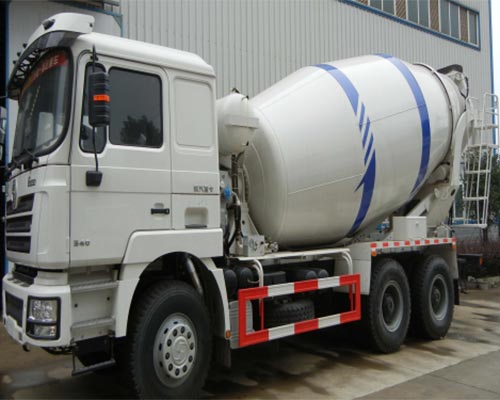 And this machine is equipped with a cylindrical mixing drum for carrying concrete.This mixing will keep rotating to avoid concrete solidification during the whole transport process.

After discharging concrete, the mixing drum need being cleaned or the concretionary concrete can occupy the inside space. As professional concrete mixer truck suppliers, Aimix transit mixer for sale will never let you down.

Mainly, transit concrete mixers, which are a little similar to self loading concrete truck mixer, is constituted with automobile chassis and special equipment of concrete mixing truck.

And the working principle of the especial equipment of concrete truck mixer is as follows. The power taken out by the power takeoff device from chassis will drive the variable pump.

Then the mechanical energy can turn into hydraulic energy, which will transmitted to quantitative motor. Next,the quantitative can drive the reducer and the reducer will order the mixing device to mix concrete finally.

Transit mixer machine  in china adopts the way of taking off energy by main engine. Specifically, the energy takeoff device takes off the engine energy by operating power switch.Then the power is transmitted to hydraulic system and the hydraulic system will drive mixing drum next.

Reducer will slow down the motor speed, then pass the speed to mixing drum, which ensure the stable performance of mixing drum.

There are two main function of control mechanism. One is to control the rotation direction of mixing drum, so that the mixing drum can do positive rotation for feeding and transportation while do contrarotation in discharging. The other one is to limit the rotation speed of motor so as to ensure the safe performance of mixing drum.

Mixing mechanism is mainly constituted with mixing drum and auxiliary support unit. And mixing drum is a concrete maintainer, which rotates the concrete along the blade spiral direction, then the concrete can be blended and mixed adequately.

If the blades are damaged or worn severely, concrete won’t be mixed evenly. Besides, the concrete may isolate if the blades have a unreasonable design. So pay great attention to the blade when purchase  transit mixer truck for sale.

The main function of cleaning system is not only to clean mixing drum but also cool the hydraulic system.

How to maintain transit concrete mixer?

There is no doubt that the concrete truck mixer can get a long service time if it can be maintained regularly. Apart from the engine,chassis and other parts, there are two parts you should pay attention to.

Concrete can solidify in a short time and it can corrode the steel and paint. Therefor,it is necessary to clean the mixing drum, feeding inlet and discharging port carefully when the transportation is finished. Some tips about cleaning are as follows.

2.Fill the water tank with water as feeding is being done.

4.Clean the discharging port after discharging, add about 30L -40L water to mixing drum, and the mixing drum should do positive rotation on the way back.

5.Remember to make the water out of the mixing drum before feeding next time

There are types of concrete mixer lorry for sale in Aimix, which is a professional concrete truck mixer manufacturer and supplier. And it mainly includes 7 types : 4m3, 6m3, 8m3, 9m3, 10m3, 12m3, 14m3, you can pick one according to your demand.

Moreover, Aimix can help you to choose the most proper one by considering capacity, size, weight, and price you want. Besides, we can support you cement truck for sale with high quality and competitive price.Want to buy a Aimix concrete mixing truck, contact us anytime.